I have a story I’ve been carrying around my whole life. I’ve been very aware of this story for years, but recent events have made me see that this particular narrative has long worn out its welcome.  The discomfort of holding on to it is far outweighing any ‘positives’ it may have once provided.

My story has given me meaning. It has helped me make sense of the world and my place in it. It has been my identity, my way of viewing and navigating life. It’s been my ‘karma’, my role, my destiny this time around.

Unfortunately, it’s largely been a ‘me against the world’ tale. 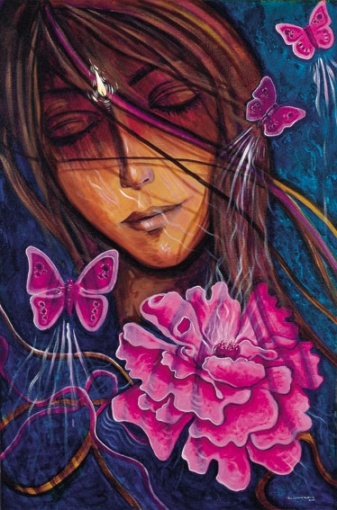 I know when it started. I was about six years old and a classmate and I had an argument about something. I’m sure it was all very cute and humourous, but what I most remember is her glaring at me, red-faced.  “Shut up,” she sputtered, “you…you…you…brown person!”

In that moment, life turned a new direction.  I was stunned.  Brown person?  I had no idea I was a ‘brown person’, let alone that it was something that could be used against me.  I don’t remember how I responded, if I did at all.  From then on, I was on shaky ground; everything was approached with caution and trepidation. Did everybody secretly think I was a ‘brown person’?  Clearly it was not a good thing.  I remember being in the backseat of my best friend’s mother’s car, telling her what happened.  ‘She’s prejudiced’, she said. ‘Prejudiced’, I mulled, repeating it slowly in my head.  What a fancy word.

White people became what I most admired and resented.  I would have given anything to be white.  To have that power.  Now that it had been brought to my attention, everything seemed to point to my difference. Not just my conspicuous brown skin, but my parents and their weird accents, always talking about ‘back home’. My grandparents, in their embarrassing clothes, and even weirder accents.  The food I ate.  The cultural activities I had to participate in, when all I really wanted was Christmas.

Throughout my childhood I idolized whiteness, yet felt totally separate from it.  This stayed with me through my teenage years, but blended with some major rage.  In glorifying whiteness, I totally dismissed – and was disgusted by – my brownness.   With this heavy inner conflict, I approached most relationships with a wall of insecurity and mistrust.  I had an intense fear of rejection.

Though I am not that teenager anymore, I don’t know that these feelings have ever completely dissolved.  I have wanted to maintain a sense of control in my interactions, so as to avoid pain: I won’t let you hurt me; I won’t let you stun me; I won’t let you catch me off guard and shake up my world; I won’t feel like a fool again; I will reject you before you reject me.

But of course that never works. Though my walls once served as safety and protection, over time they have closed in, and I have become acutely aware of how my story plays out in more subtle and insidious ways.  In the lingering need to impress, in wanting to project a certain image, in people pleasing.  In taking things personally.  In needing external approval and validation – especially from white men – to feel good about myself.

Until now, my own approval hasn’t been enough.

I am seeing with new eyes those parts of me that I hated and rejected for so many years – and asking their forgiveness.  I am embracing what I’ve been trying to escape my whole life – the difference I could never hide. I am feeling pain that I’ve spent so much energy being ashamed of my heritage and my loved ones – some of whom are gone.

I am thankful for this wakeup call.  Sometimes we need an event or person to blaze through our lives in order for us to truly ‘get’ something on a level we wouldn’t otherwise. It has to be big, so we feel the necessary pain that often inspires great change.

Or it’s just timing.  We grow up and realize we don’t have to act from our scared inner child anymore; we are far more powerful and responsible than that. We know that it’s truly time to get over it, and start serving the planet instead.  We see the excuse our story has become, and we count our many blessings.  We feel how precious our lives and energy and hearts are…much too precious to give away to fear, in all its seductive forms.  We realize we’re worth more than that.

I want to take my connections with friends, loved ones, and strangers to a deeper and more authentic level. To stop holding the vague grudge that I am ‘owed’ something.  To breathe through the discomfort that comes with a new and different way of Being.  My story is just a memory that became imprinted and ran away with Me. Yes, it served its purpose in getting me to this place, and I honour that.

But I am here now, and it is time to let it all go – not just for me, but to release the world of one more tale of pain and separation.

49 thoughts on “goodbye to the brown person”