I write these words the day before the February full moon, also my 40th birthday. For weeks I was looking forward to participating in Barbara Franken’s awakening challenge – I picked a pretty auspicious day for reflection – but now that the moment is here, I feel blocked. There’s so much to say about awakening, yet it all feels like concept. How to write about the ineffable? 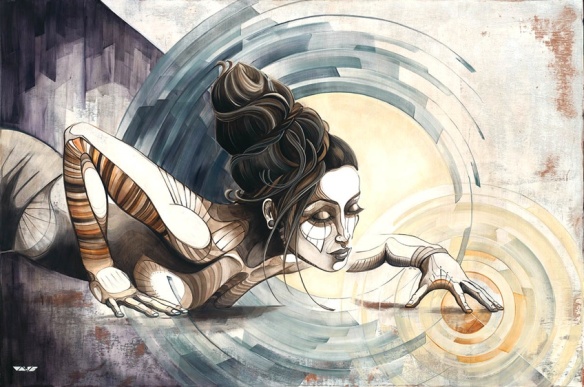 I moved away from my current city last summer, only to return a few weeks ago. I’m living in the same apartment building as before the move, and this week I’ll likely return to my former place of employment. My favourite cashiers are still at the Whole Foods down the block, giving me extra stamps for my coffee. I hear the familiar sounds of birds chirping outside my window, and a siren in the downtown background.

Back in August, I couldn’t wait to get out of the city. I was so tired of honking horns, screaming sirens and noisy neighbours. I was on edge all the time, and desperately wanted to be somewhere quieter, more removed. I needed to hear my own heart and voice, and I just couldn’t do it where I was.

And the move was good for me. I started my Kundalini Yoga teacher training program, met some wonderful new people, learned valuable work and life lessons, and, two weeks before moving back, ‘randomly’ reconnected with a soul mate for some much-needed healing and completion.

But overall, I didn’t really find the peace I was searching for. In perfect universal order, all the sounds I’d resisted followed me to my new place. I got it – changing the externals wasn’t going to change much. It was time to come ‘home’.

Knowing What She Wants, Hans Walor

Since last October, when I began my teacher training, I’ve gone from sporadic meditation to a daily practice of yoga, breathwork, meditation, and/or mantra chanting. Specifically, for the past two weeks I’ve been doing a meditation designed to calm the heart.

As I become more attuned to my body’s signals and sensations, I can feel the bracing of my heart. For many years I’ve held my breath, hypervigilant, steeling myself from any potential hurt or shock coming my way. Lying in savasana, deep relaxation, I’m aware of how difficult it’s been for my system to just…relax.

With patience, practice, humility, commitment, and discipline, I am becoming stabilized in my own heart. This is my awakening. My breath is clearing the way. My heart was never closed to begin with. It has always been strong, open, pounding, wise, knowing, and loving – waiting for me. And now I get to live in that place.

The sirens don’t bother me so much anymore. The loud noises aren’t so jarring. Since participating in Barbara’s first challenge, I’ve learned and unlearned so much. I’m a different person than I was two years ago, six months ago, two weeks ago. Nothing has changed these past few months, yet everything has changed. My experience of awakening will surely change too. And it’s all perfect.

Thank you for this opportunity, Barbara. Next up is Sue at http://suedreamwalker.wordpress.com.

It took a whole year – literally! – but last weekend I revisited one of the scariest places I’ve ever been – a sensory deprivation (isolation) tank, aka ‘float tank’.

My first experience was, for the most part, harrowing. I had no idea what to expect, as I never considered myself claustrophobic. (Then again, I’d never been enclosed in a small space, floating on water, in complete silence and blackness.) I didn’t know just how deafening my mind was (is), until I had to spend 90 minutes tuned into its inane soundtrack, with no distractions whatsoever!

It wasn’t all terrifying; there were moments of stillness and peace. And for weeks after, I couldn’t stop thinking about that darkness. Why had I been so scared of it? What made that void so powerful? Was there anything beyond the fear? What possibilities could be created from that space of nothingness?

my home for the next 90 mins

Well, a year later, I decided to revisit the tank. I was slightly dreading the experience; I remembered some of the ridiculous thoughts that plagued me the first time around (What if there’s an earthquake and no one can save me?), and I did not feel like reliving all that again. But, as I’d realized after my first session: that enclosed, dark place isn’t just located in that chamber. It’s always there. Lurking in my consciousness, guiding my every day reactions and decisions. In the tank, I can’t avoid it. Sure, I can physically get out…but it will follow me. So I knew I had to face it again.

Almost immediately after starting my float, I felt petrifying fear at my core. I became aware of acute pain in my neck and shoulders, which lasted throughout the session. Adrenaline coursed through me and I often felt short of breath. Is this how I feel all the time, and just don’t notice it?

Lying there in complete stillness, I felt defenceless. I am very vulnerable in this place…open to attack…I need to be on guard in case something unexpected happens…When I let my guard down is when there will be attack…I’m a mouse, not a lion…I live in fear, trying to control every aspect of my life…

The fear made me hold my breath. Which made me start to panic. Which only made me more fearful!

Then I would remember to breathe. Deeply. And remind myself that it’s not the situation itself that makes me hyperventilate – it’s my thoughts about what could happen. Thoughts that, no matter how ludicrous, seem so real they take on a life of their own, distorting my reality so that I’m blinded to everything else.

In this void, there was nothing to hold onto, to ground me. There was no ‘Aleya’ here. I was reminded of a previous Ayahuasca journey, where my physical reality dissolved in front of my very eyes. My ego did not enjoy that one bit, and the experience still haunts me to this day. I also remembered being in my ex’s presence years ago, and feeling an immense void within. It was something he could never fill, and we both knew it. He was showing me something I’d have to face on my own, sooner or later. It came sooner than I wanted it to.

We are told to ‘look within’ to find love. But this has often felt very conceptual. Many spiritual teachings refer to a loving Mother/Father God, a universe that only wants the best for us. And this is such sweet relief for those of us who grew up in religious upbringings with a judgemental, patriarchal God. In environments where we became intensely self-policing in order to avoid disapproval and punishment, because in survival mode, disapproval = death.

What if I look within…and there is nothing there?

This is the core of all my fear. And it stops me from seeing what could be on the other side of it.

What if there actually was an earthquake? I let myself really sink into that fear, and stay with it. My resistance yielded a little. Even if the worst did happen, I would be ok. This body in the tank wasn’t all of me. I sensed something dormant – huge creative reserves I have not yet tapped into. Are they really there? What will activate them?

I pictured myself floating on a beautiful amber-pink liquid – the colour of a soft sunset. I imagined my little self in the womb, about to emerge into this world. What would I want her to know? That her only ‘mission’ is to live this expression called Aleya, and let her do what she loves to do, no questions asked. Living the expression is enough. On a cosmic level, it’s doing more than she can consciously comprehend.

Will I do another float? Yes, definitely. There are many treasures in this darkness.

a few years ago a relative told me i reminded her of a jellyfish.  i was confused and she explained: she saw me as translucent, a pearly bubble ready to burst with all the colour and potential and goodness inside me.  she said i couldn’t see it, but she could.  it was a sweet conversation and one i remember once in a while.

maybe it’s all the end-of-2012 talk, but lately i’m beginning to feel those colours emerging.

something has shifted. like i’m breathing a sigh of relief. like i made it to the other side of something. i don’t feel quite so intensely compressed, like i’m a tube of toothpaste and someone is trying squeeze every last bit out.   although everything looks the same, something unseen and profound feels to have taken place.

but instead of feeling ungrounded or anxious, i feel peace.

-i’m not being punished.

-there’s nothing to feel guilty about.

-it’s not about the money.

whatever i used to say to myself that stopped me from doing what i really love to do, does not work anymore.

and saying that ‘i still don’t know what i really love to do’ (my usual fallback) is also an excuse, of sorts.  maybe i don’t consciously know, but it’s there nonetheless, and moving within me.  something inside has cracked and there’s an opening…to something that’s been closed a very long time.  the hope that maybe i can create whatever i want.  maybe, just maybe, everything i’ve believed for 30+ years no longer has power over me.  it’s subtle yet undeniable.

just the act of putting pen to paper (or fingertip to key) shows that something has shifted.  why today?  why after years and years, did some part of me decide that yes, today is the day to write?

my story that’s not a story. 🙂